Waking Up From a Lifetime of Hypnosis

The Center for Common Sense Counseling 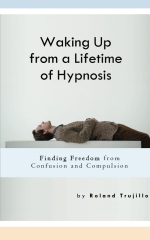 Waking Up from a Lifetime of Hypnosis

Finding Freedom from Confusion and Compulsion

What You Need to Know about Hypnosis

Take Control of Your Life

The Meaning of the Moment

Is Denial Keeping You from a Life of Fulfillment?

Are You Leaking Energy?

The Hypnosis of False Goodness

The Power of Faith

Users and the Used

From Intimidation to Freedom

Another Look at What Stress Really Is

The Science of Controlling Stress

With Patience We Wait for Our Need to Be Answered

People's beliefs and convictions are in almost every case gotten at second-hand, and without examination, from authorities who have not themselves examined the questions at issue but have taken them at second-hand from other non-examiners, whose opinions about them were not worth a brass farthing.

Why do smart people do dumb things? In fact, why do you do things that you know are not wise? Why do you drink, smoke, eat too much, spend too much, eat the wrong food, or say the wrong things? Could it be that you are under a spell and don't even know it?

Before you laugh and say that such an idea is absurd, ask yourself why you have done some of the dumb things that messed up your relationships, your health, your finances, or your life.

How about all your compulsions and obsessions? Do you really want to bite your nails, get upset at traffic, or spend too much money?

Could it be that you are not in control of your own life?

Do you ever feel out of control? If so, what are you reacting to and why can't you just stop yourself?

We read in the Bible about something called original sin, and we are told that the human race is laboring under a curse of sin from which we need to be set free by the Messiah.

Could it be that something as simple and seemingly innocuous as hypnosis is part of the curse of sin? Perhaps the curse of sin is the spell of sin, and our misdirected life is what we do under the spell. So just who are the hypnotists in your life who know how to push your buttons, get inside your head, upset you, and motivate you?

This book hopes to answer some of these questions and also give the reader clues to waking up from any trance they may now be in.

What could be more natural than to be fully awake and living with wisdom? If you could find this fully awake and aware state, you could resolve your issues and err no more. You could regain control of your life and move forward to find your purpose for existence.

If you want frustration and resentment to leave your life, then simply learn the art of not setting goals. If you have no goal, then there will be no more striving, frustration, futility, or resentment.

Goals are almost invariably not your own, but were given you by someone else. That is why you feel pressure when you think of a goal, and also why goals give you a vague discomfort and a sense of futility. The goal is not your goal.

Someone in your past was a motivator (hypnotist) and in a moment of excitement or resentment, you took in the suggestion. After that you are compelled to give yourself to the goal and sacrifice your life to it. When you feel so frustrated and unhappy about it that you can no longer stand it, you might try to rebel—like quit your job, quit school, or label yourself a failure. You might do the opposite of what you were pressured and motivated to do, like eating too much again instead of dieting, or drinking and smoking again instead of abstaining. But you are not happy with these either.

Your struggle against the goal (someone else gave you) only makes it stronger, and even if you throw in the towel and stop trying, the goal and the voice of the tempter is still there in your mind haunting and tormenting you.

Think about it. If you were doing what is natural and intuitively realized, why would there be any frustration of futility associated with it? What could be more natural than just living wisely and doing the next right or wise thing?

It is actually possible to live a happy and stress free productive life, one realized from within and one which brings a sense of improvement without struggle and frustration.

Your problem is that you have become hypnotized, and it happened when you were upset or resentful. You did not know what was happening to you, and that is why I am writing this book, so that I can expose the everyday mechanisms of hypnosis under which you are currently laboring and suffering.

People were cruel and teased you, and then you took in their suggestion. If they told you that you were stupid, and you bought the suggestion, then you spent the rest of your life unconsciously making their prophesy come true by acting stupid which is the suggestion you accepted.

Chances are, you might have become angry at their suggestion (which is how it got in), but then struggled against it—making it stronger.

Other hypnotists were wheeled into place who took over, since you were already in a hypnotic trance, and they suggested ways of proving that you were not stupid.

They challenged you to study, and said that if you got degrees then you would not be stupid. Perhaps you still thought you were stupid, but other hypnotists suggested that if you were a great dancer, entertainer, athlete, or popular, it would take away the curse.

So you did everything the coach, teacher, or the peer group said would make you smart, rich, or popular.

But none of these ideas were your own, though you may have gleefully gone along for the benefit. All the unhappy, addicted, and suicidal Hollywood stars who are miserable and out of control, proving that following other's goals for you, even if such goals bring a measure of worldly success, will not bring happiness.

I used the example of someone being called "stupid," and then taking in the suggestion and acting stupid, or struggling against it, but there are as many suggestions are there are wicked, loveless and misguided people to make them.

You will have to meditate to come up from your hypnotized state and become aware, and then you will be able to slowly begin to see all the suggestions that have resulted in your frustrating, unhappy, compulsive, compensated, unfulfilling lifestyle—one that will kill you unless you wake up from it.

Since you are walking in your own shoes you will have to see just what the unseen influences have been on you, how goals you thought were your own are not, and just who the hypnotist was who first set you on your course of error.

All I can do here is point out the phenomenon to make you aware of it, describe it, and offer some clues to help you see the origins of your own issues, so you can start to break free.

Beware of the grace robbers who inject themselves into a natural thing and ruin it if you are not aware and careful. When a child is seen to have ability in some area—such as playing a musical instrument, or in some sport—parents and other loveless authorities see it as their bounden duty to begin to egg the child on to work, study and compete to become great and famous. At first the child naturally enjoys the tasks, but through struggling and striving at the behest of the authority which has become the motivator, the child will soon be striving to achieve and win, instead of functioning with joy out a natural and timely interest.

Some kids begin to buckle under the pressure and falter. Others keep trying and succeeding but are unhappy. Others try and fail, and then blame themselves or commit suicide. Everyone wonders what went wrong, and no one suspects the doting pressure monger parent and the loveless teachers and coaches she turned the child over to.

Some kids will eventually throw down their musical instrument and never play again. They hate it, but they really hate the pressure from the authority and have transferred the hate to the instrument or to themselves.

This is sad because the child really did have talent and a natural interest in the activity. Had the child been provided opportunities but instead of being pressured and challenged, was shielded from loveless pressure, the child might have become a successful artist or athlete, but also happy and joyful instead of miserable and compensated.

Other kids had ability in some area, but it was not really in accord with what should have been their natural enfoldment. Their true calling was suffocated while they were forced to achieve in a certain line that was not really natural for them.

This does not mean that it is wrong for people to take a job or learn a trade out of necessity or expediency to earn a living, provide for their family or survive. But you can see that there is here a common sense motivation, so it does them no harm and often turns out to be both healthy and leads to a natural success. You see, it is done with a practical or altruistic motive, or perhaps no motive at all, other than to do the next right thing. This is a far cry from studying in order to please mother, teacher, and other pressure mongers who come along.

Of course the guilty and wicked pressure mongers will twist my words and accuse me of saying that kids should allowed to be undisciplined and allowed to run wild without direction. They say that unless a child is motivated, the child will not succeed.

Those who themselves have been pressured know nothing else but pressure. They have lost the ability to function without pressure. All they know is being pressured and pressuring others.

But the truth is that the welfare roles, the skid row areas, the rehab clinics and the insane asylums are filled with people who are there because of the pressure. It was the inhuman pressure to succeed that drove them to failure.

People like Albert Einstein and Apple Computer founder Steve Jobs, succeeded in spite of the pressure. Albert Einstein rebelled against the authoritarian practices he was subjected to, and his learning took place on his own. Thank God he did not become a marijuana smoking dropout from the system, or a loveless unhappy pressure source himself. He would have lost his creativity, his innocence and his joy.

© 2019 The Center for Common Sense Counseling.